Evolution of an Art Store 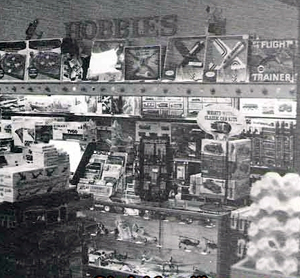 Post-war New Haven 1947: The iconic hobby brands Erector Set and American Flyer are being manufactured in a building that today houses dozens of art studios. Harry Hull opened Hull’s Hobbies on upper Chapel Street, offering the kind of personal attention and service only an independent store can provide. Under his stewardship Hull’s flourished and became a regional icon.

Along with social and technical changes, the 1950s & 60s brought competing interests like television, discount stores and suburban shopping. This sociological evolution forced many downtown “Mom & Pop” hobby shops out of business. Fortunately for Hull’s, it was located two blocks from the Yale Schools of Art, Architecture and Drama. The same materials used by hobbyists to build planes and create train layouts were employed by architecture students and professional architects as they built physical study models. The completion of the Yale Art and Architecture Building in 1963, along with a growing architectural community, added greatly to the demand for a wider selection of supplies.

Throughout the 70s, 80s and 90s, art supplies filled the void left by the trains, planes, rockets and slot cars, all overlooked by today’s generation of computer gamers. As Hull’s became increasingly popular with art students, as well as casual and professional artists, a demand for picture framing emerged. There was only so much space in a 900 square foot shop, so picture framing, cards, prints and art novelties were added in an adjacent storefront. 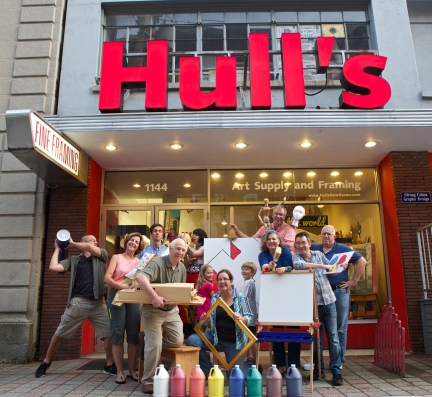 In 1999, Hull’s was purchased by Steve Kovel. In order to more accurately reflect its modern incarnation, he renamed it Hull’s Art Supply & Framing. Later that year, Steve moved the business one block east into a former derelict building that he purchased and thoroughly renovated, effectively tripling the original selling space.

Today, Hull’s is owned by Shawn Szirbik. As him and his crew at Hull’s carry out their mission of “Igniting Imagination,” come in and discover that the “Art Store” is no longer the exclusive domain of college students and professional artists; it is now a resource for creative minds of all ages and abilities. Stop in and browse, we’d love to treat you to the same level of personal service that you would have received from Harry Hull over 65 years ago.

Back to About Us