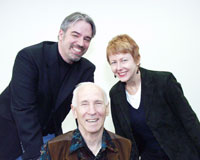 In business since: 1999 Stopped by for the interview: Owner Stephen H. Kovel, Barabara Hawes (framing manager), Stewart T. Johnson (manager) How’d you get the idea to start the business? Stephen: I was involved in art supplies and wanted to take an existing shop and make it better.

What do you like most about your line of work? Stewart: The personable environment both externally and internally. I can greet most of the customers by first name and talk in depth about everything.

If you could magically change jobs and be in another line of work, what would it be? Stephen: Something that would make New Haven even better. Barbara: A full-time painter. Stewart: Working for and improving the city like a civic organizer.