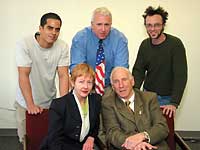 When you are the Hull’s framing department and you will frame anything, you tend to get a pretty fair amount of jobs lined up for the week. Now add into that busy, daily mix this scenario: The Knights of Columbus Museum calls and informs you that they have some ancient, enormous paintings. They will be part of the museum’s huge exhibition of never-before-seen, religious art from Mexico. Those nine antique masterpieces, which you haven’t actually seen but have some rough measurements of, need frames that fit in with the rest of the exhibit. The K of C needs them completed in one week.

And you get the job.

That actually happened. And Rob “the Framer” headed the job and got it done…in less than a week.

Hell, that and the fact that the same staff supplies the goods for artists and non-artists for all the area universities, high schools, art classes and just from around the way–it’s no wonder Hull’s has won again.