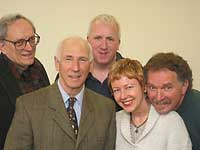 The painter Tony Falcone had a big job. The Coast Guard’s 40th anniversary was coming up, and they wanted him to mount and display 14 small-scale paintings for a big celebration. He needed a half-dozen easels of a specific kind, and he needed them tomorrow.

He went to Hull’s, where the general manager, Shawn Szirbik, started asking questions. The right questions. Then he gave some needed answers. For instance: Falcone needed something durable, not foam. Szirbik produced gatorboard. He needed four-by-eight sheets. Szirbik found some in stock and got the rest in the next day. Falcone couldn’t afford all the easels, so Szirbik rented them to him. “He saved the day,” says Falcone.

Photographer John Hill needed a specific answer: What the heck is an “A-1”? The man from a German gallery wanted him to design a poster to that size. After striking out with poster dealers in Boston and New York, Hill called Szirbik, who knew right away.

Hull’s is used to unusual requests and, as in this case, European measurements. That has made them A-1 to their customers and an Advocate readers’ poll winner four years running.